skip to main | skip to sidebar

I have a friend in Brasília named Breno who is familiar with African rituals, known as Candomble, or Brazilian VooDoo.

Candomble began in Brazil in the second half of the fifteenth century with the arrival of the first slaves, and with them, their Orixas –their gods.

Whenever I go to Africa Breno asks me to bring back something connected with these African rituals. I never managed to bring back anything significant.

So whenever I am in the area between Benin and Nigeria, the region where the majority of the rituals practiced in Brazil originated, I think of Breno´s standing request.

“If you can, bring me an axe used in the initiation ritual. It is a metal axe with two cutting edges.”

Determined to get hold of one of these axes, I asked some people where I could find one. They told me about a small farm about 100 km into the interior where “these types of things” could be found, according to my informant.

Since I had rented a car with a driver and had the day free, I decided I would go have a look at the African interior and see if I could get hold of one of these two-bladed axes.

In the hundred kilometers on the way to our destination, we saw few people, and all of them black.

We managed to find the little farm. It was an enormous house with a gloomy air. In front of the house was an old jeep and circle of people sitting on the ground and thrashing some kind of beans. Two others were beating enormous drums that seemed to be calling the rhythm of work.

On the porch, two bull carcasses flanked the front door seeming to foretell what we might expect to find inside.

We were received by two young people, a man and a woman, shabbily dressed, who took us to see a fat black woman in a white lace dress with draped with necklaces hanging from her neck, her wrists, and her ankles. The woman remained seated.

The inside of the house was monastic in its austerity. There were only some chairs made with leather straps, a table and a pot with drinking water, I believe.

There was smoke inside the house and a strong smell permeated the entire atmosphere. The heat was almost unbearable. Hanging from the ceiling and the walls were bones and skeletons of animals decorating the place.

With the help of our Yoruba-speaking driver I explained that what I wanted was a small two-bladed axe and some amulets both used for initiation rituals.

The black lady got up and banged on the table with some kind of baton or maybe a scepter. With that two large muscular men appeared who seemed to be the guards of the house.

We were led along a narrow corridor whose walls were decorated with bones, bodies, and skins of animals.

One dead animal caught my attention in particular. I asked what it was and was told that it was a monkey that inhabited the region. I am no anatomist, but that body, as far as I was concerned, was that of a person.

The long narrow corridor exaggerated the feeling of heat. The smoke, the drumming, and the smell of rotting flesh getting stonger and stronger combined to induce a feeling of nausea.

We got to the kitchen. That is where they had prepared the bones and carcasses we had seen throughout the house. In a giant cauldron the bones were boiled until they were totally white. The smoke and the smell that permeated the entire atmosphere of the house came from that macabre kitchen scene.

The smell, the smoke, the drumming, the heat, the sweat, the feeling of nausea.

I awoke covered with sweat, my heart racing and the telephone ringing. 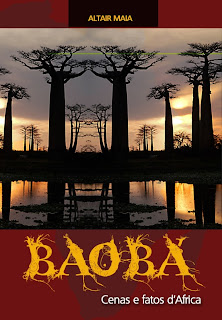